This post is based on an advanced tutorial for CSC373: Algorithm Design, Analysis, and Complexity, which I presented on January 30, 2017. For more information, check out the course textbook [2], and [3]. \(\newcommand{\DFT}{\operatorname{DFT}}\)

If you’ve ever done anything involving signal processing or data analysis, there’s a good chance that you’ve heard of the fast Fourier transform. Originally explored to solve some specific engineering problems, and first published in its general form—as we know it today—by James Cooley and John Tukey in 1965 [1], the fast Fourier transform is an incredibly famous algorithm that has tons of applications in areas like digital signal processing, speech recognition, data compression, communications, and computer vision, to name a few.

The goal of this post is to introduce the fast Fourier transform, by looking specifically at how it can be applied to obtain efficient algorithms for polynomial multiplication.

As an aside, the algorithm for polynomial multiplication that we’re about to discover also forms the basis for what were, until recently, some of the best-known algorithms for integer multiplication. If you think about it a bit, this should make some intuitive sense: You can think of the coefficients \((a_0,\dots,a_{n-1})\) as representing the digits of an integer in a given base (typically base 2), when this base is substituted for the variable \(x\). Then integer multiplication is kind of like polynomial multiplication, except that we also have to take into account carry digits. Combining the fast Fourier transform with several clever number theory tricks gives us the Schönhage–Strassen algorithm, which lets us multiply two \(n\)-digit integers in time \(O(n\log{n}\log\log{n})\).

So far, we’ve assumed that a polynomial is represented by its list of coefficients. However, the following fact will suggest an alternative way of representing polynomials.

This is essentially a generalization of the statement “given two points in the plane, there is a unique line that passes through them.” Proving this is an exercise in linear algebra; given \(n\) point-value pairs, we can compute the coefficients of a polynomial passing through those points by solving a system of linear equations.2

Using this representation, it’s now much easier to multiply two polynomials \(A\) and \(B\), by simply multiplying their values on the sample points \(x_0,\dots,x_{n-1}\) pointwise:

Therefore, if we use the point-value representation for polynomials, then we can multiply two polynomials of degree \(n - 1\) using only \(\Theta(n)\) arithmetic operations, instead of the original \(\Theta(n^2)\).

To fix this, we can represent \(A\) and \(B\) using an “extended” point-value representation, by using \(2n\) point-value pairs, instead of just3 \(n\). Asymptotically, this doesn’t affect our overall running time, since it only increases our input size by a constant factor of 2.

It’s great that we can multiply polynomials in linear time, using their point- value representation, but we’d really like to do this using their coefficient representation. This gives us the outline of our algorithm for multiplying polynomials: Given two polynomials \(A\) and \(B\) in coefficient form, convert them to point-value form by evaluating them at \(2n\) points, then multiply them pointwise in linear time, and finally convert the result back to coefficient form, via a process called interpolation. 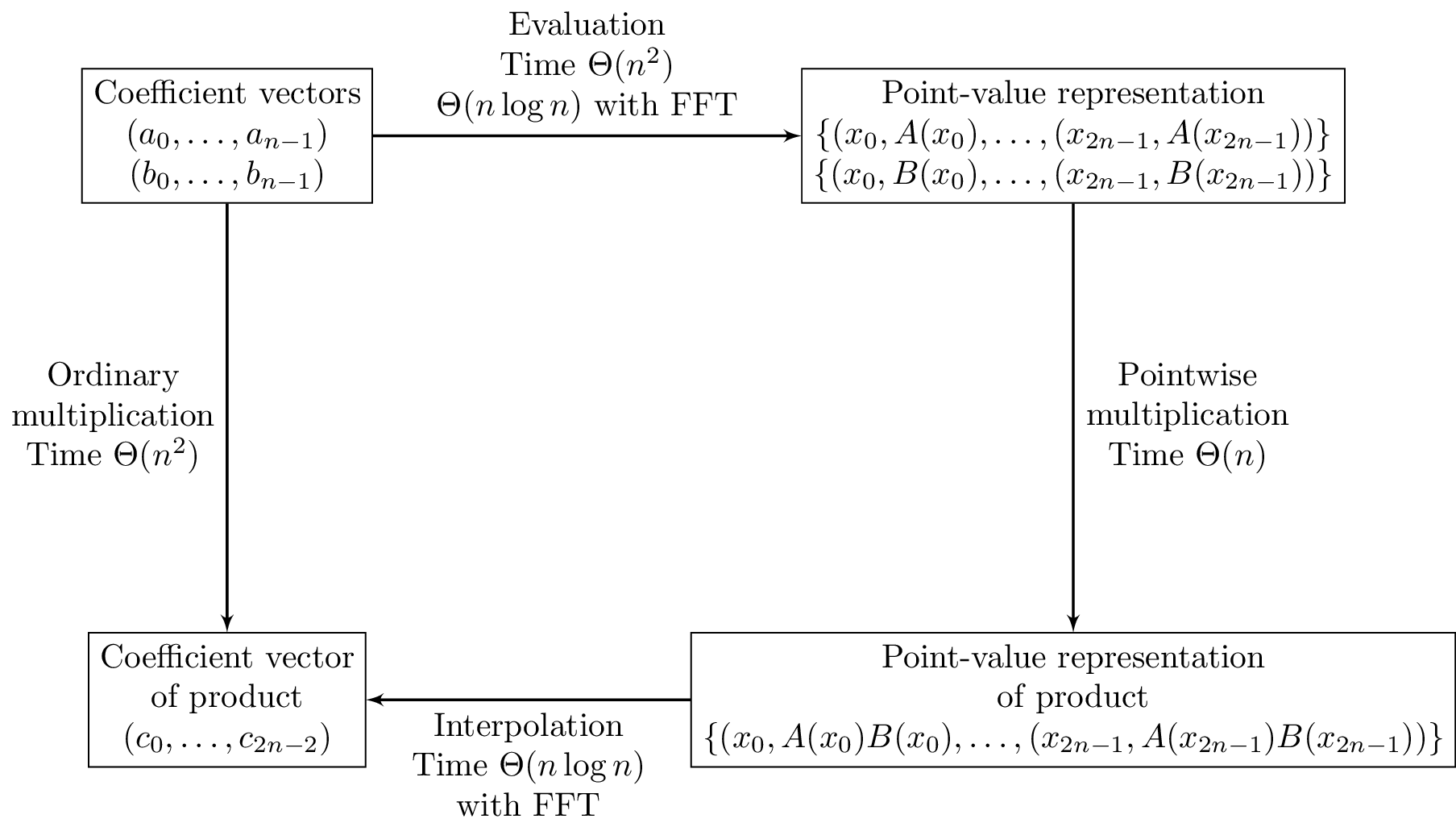 Outline of the approach to efficient polynomial multiplication using the fast Fourier transform.

In general, evaluating a polynomial \(A\) at a single point \(x\) takes \(\Theta(n)\) operations, and since we have to evaluate \(2n\) points, the evaluation step takes time \(\Theta(n^2)\). So it seems like we still aren’t doing any better than the ordinary multiplication algorithm.

The key point is that the evaluation step will take \(\Theta(n^2)\) operations if we just choose any old points \(x_0,\dots,x_{2n-1}\). But for a particular choice of points, namely, the complex roots of unity, we’ll see how we can evaluate \(A\) on that set of points using only \(\Theta(n\log{n})\) operations, using the fast Fourier transform. It’ll also be possible to use the FFT to do the interpolation step, once we have the product of \(A\) and \(B\) in point-value form.

Proof. Using the formula for the sum of a geometric series,

Now we are ready to define the discrete Fourier transform, and see how it can be applied to the problem of evaluating a polynomial on the complex roots of unity.

Here, the \(n\) is really the \(2n\) from previous sections, however we will simply use \(n\) to denote the length of the vector \(a\) when describing the DFT to simplify matters.

So far though, we still haven’t gained much, since applying this definition and directly computing the sum for each \(k\) takes \(\Theta(n^2)\) operations. This is where the fast Fourier transform comes in: this will allow us to compute \(\DFT_n(a)\) in time \(\Theta(n\log{n})\).

Now that we have the general idea behind how the FFT works, we can look at some pseudocode.5

The pseudocode more or less follows the algorithmic structure outlined above. The main thing that we need to check is that the for loop actually combines the results using the correct formula. For \(k = 0,1,\dots, \frac{n}{2}-1\), in the recursive calls we compute, by the cancellation lemma,

Inversion Formula and Interpolation via FFT

The first idea here will be to observe that \(\DFT_n:\mathbb{C}^n \to \mathbb{C}^n\) is a linear map. This means that it can be written in terms of a matrix multiplication:

We can denote the matrix on the left-hand side of this equation by \(M_n(\omega_n)\). This matrix has a special name in linear algebra, and is called a Vandermonde matrix. To solve the problem of performing the reverse of the discrete Fourier transform, and convert from the point-value representation to the coefficient representation of a polynomial, we simply need to find the inverse of this matrix. It turns out that the structure of this particular matrix makes it particularly easy to invert.

This key takeaway of this inversion formula is that it enables us to invert the discrete Fourier transform by using the exact same algorithm as the fast Fourier transform, but with \(\omega_n\) replaced with \(\omega_n^{-1}\), and then dividing the entire result by \(n\). Therefore it is also possible to perform polynomial interpolation (from the complex roots of unity) in time \(\Theta(n\log{n})\).

Putting it all together, this demonstrates how it is possible to multiply two polynomials, by computing their values on the \(2n\)th roots of unity, doing pointwise multiplication, and interpolating the result to obtain the coefficients of the product. All of this takes time \(\Theta(n\log{n})\), which is a significant improvement over the naive \(\Theta(n^2)\) algorithm.